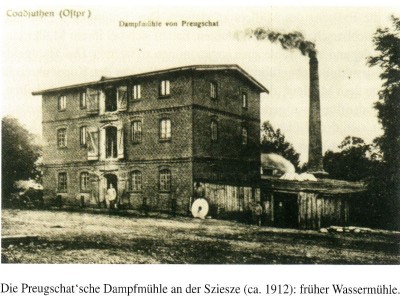 According to the German Order (or Meln Treaty, 1422), the territory of Katyčiai village had belonged to the Grand Duchy of Lithuania. The historical resources provide that during 1451-1485, a small Lithuanian village was situated in this place. Not far from the village there were the boundaries of Lithuania and Teutonic Knights. In written references it is mentioned, that in the middle of XVII century the parish school had been already operating, in which the pupils were taught in Lithuanian and German languages. During the period 1915-1919 the priest Vilius Gaigalaitis had strengthened the Lithuanism. A few years ago Stubriai Primary School had celebrated the anniversary of 100 years. It is one of the oldest still operating schools in the territory of district, and is established in the building of architectural heritage.

Kristupas Lekšas (1872-1941) the creator of chants, the social activist and politician of Lithuanian Minor, and the poet Salys Šmerauskas, who has published a collection of songs “Granata krūtinėj” (“The Grenade in the Breast”) have left a deep trace in Katyčiai village.

In Katyčiai village a significant cultural heritage has remained, having a deep historical past. The places of interest are situated in one place (the market square, the Evangelical Lutheran Church, the old school) and are still in a good condition. The Akmeniškiai mound, from which the landscape of Katyčiai Eldership can be clearly seen, could be the attraction for tourists.

Katyčiai Eldership was established in 1995.

The Coat of arms of Katyciai eldership.