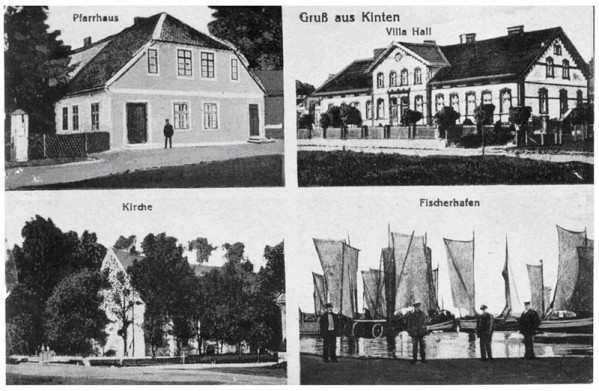 Kintai has begun to develop in XVI century. In historical sources provide the first mentioning of Kintai village in 1540. Kintai village differs from other villages of Lithuanian Minor, because of its architectural-urbanity heritage. In 1705, the church of Evangelic Lutherans and the parish primary school were built, in which during the period 1888-1892 the philosopher and the social activist of Lithuanian Minor Vilhelmas Storosta Vydūnas (1868-1953) had been working as a teacher.

Minija village is an old settlement of the fishermen, the main street of which is the Minija River, dividing the village into two parts.

On the way to Ventės Ragas, on the left side of the road there is a small Muižė cemetery, in which the inscriptions on crosses still can be seen. Under the huge oak tree E.W. Berbomas (1786-1863), the chief inspector of Curonian Lagoon, the ethnographer, the creator of fishermen’s signs and the weathercock was buried.

The lighthouse of Ventės Ragas is a technical monument, built in 1863, and is an important and effective building for observation, from which the Curonian Lagoon, the Curonian Nerija Spits, Nida, Preila, Pervalka and Juodkrantė can be seen. Ventės Ragas is one of the largest places of birds’ concentrations in the migration path from the White Sea to the Baltic Sea.  In 1929, the professor T. Ivanauskas initiated the establishment of Ventės Ragas ornithology station. One of the first bird-ringing in Lithuania was Mikas Pozinskis, who was registered into the Central European Ornithologists’ Manual.

The Coat or arms of Kintai eldership.