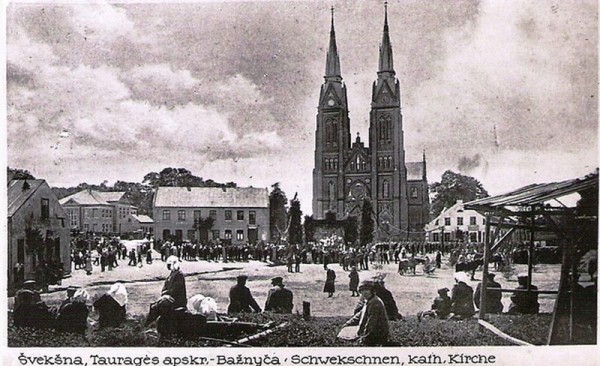 Reception of the President, 1928. (photo sent by V. Astrauskiene)

Since Sveksna was the Great Lithuanian border village, during the period of Lithuanian press ban, many book smugglers were brought together to work by Juozapas Rugis. The writer Simonas Stanevicius, who has been living and creating in Stempliai Manor for 12 years, was buried in Sveksna cemetery. The signer of the Declaration of Lithuanian Independence on the 16th of February in 1918 Kazimieras Saulys, was born in Stempliai.

Near the Švėkšnalė River, all the arrivals into Švėkšna face to the two-tower neo-gothic Church of St. Jacob (lith. Šv. Jokūbas; built in 1905; the height of the towers is 75 metres). The Church is connected with Sveksna Park by the overpass built over the street. The park was established in the second half of the XIX century, by the orders of the counts Pliateriai. A huge variety of trees grow in the park, the people are attracted by Genovaite’s Villa, which was built in 1880, by the sundial and the sculpture of Diana – the Goddess of hunting, built in the pond island. In 2 km way from the centre of the village, Vilkėnai Manor, established by count Jurgis Pliateris, and Vilkėnai Mill, built in 1843, stand in the old park territory.

Arriving into Švėkšna the monument, constructed for the mentioning of the Millennium of Lithuanian Name by the community in 2009, can be seen. There are other monuments standing in Švėkšna, i.e.: the wooden chapel in memoriam of the book smugglers, the sculpture of St. Florian (lith. Šv. Florijonas), the monument “Freedom” (lith. “Laisvė”). On the way to Švėkšna, near Inkakliai village there is the imitation of Lourdes with a statue of Maria and water source, and a stone brick chapel, in which every year on the first Sunday of July the religion feast take place.

The Coat of arms of Sveksna eldership.